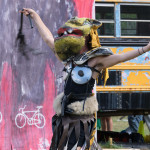 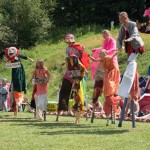 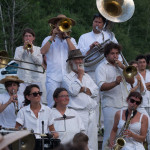 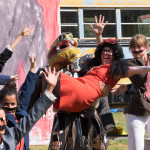 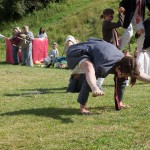 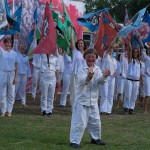 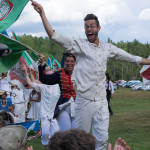 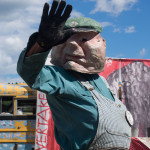 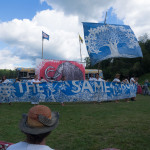 Bread and Puppet puts on free performances every August in Glover, in Vermont’s Northeast Kingdom. It’s called the Bread and Puppet Circus. For about an hour you will see a series of skits about social issues. They each last  four or five minutes.

The theater is  one of the oldest non-profit, self-supporting theatrical companies in the United States. It’s over riding theme is for social justice. Performances are invariably a comment on wrong doing by government and big business. Capitalism does not find much favor at Bread and Puppet.

The theatre was found in the early 1960s on New York’s Lower East Side by Peter Schumann, first concerning itself with “rent, rats and police”.   Bread and Puppet Theater started small, performing in the streets, at outdoor shows, and taking part in parades and was active in the anti-war movement.

Eventually Schuman ended up in Glover. In 2011, he made his last performance on stilts, something he was famous for.

You can find an August 2015  Circus Performance on Video-Vermont, under the events sectioon

This site uses Akismet to reduce spam. Learn how your comment data is processed.